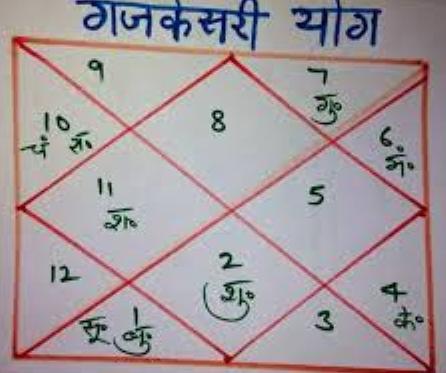 Gaj Kesari Yog Vedic astrology has much auspicious yoga, Gaj kesari yoga is one of them. Gaj Kesari is a Sanskrit word that wherein Gaj means Elephant and Kesari means Lion. But herein it should not be confused with Elephant and Lions.

Gaj Kesari yoga is formed in the kundali of a person when Jupiter is in the central position that is ascendant, fourth, seventh, tenth house from moon.

Planet Jupiter is the provider of wealth, knowledge, luck, children and fame while prosperity, softness, happiness, mobility and heart is bestowed by moon.

The person having Gaj Kesari yoga in his kundali is strong and has capability and great ability to defeat his enemies.

And not only he is able to defeat them rather he is capable enough to dominate them in all spheres of life.

An influential voice along with higher professional position is some of the traits found in all such persons. They have great ability to plan smartly, clever and beforehand all their targets and goals to assure their success. The formation of this yoga depends on Jupiter and Moon that assure great wealth along with improved economic conditions.

If we talk about simple formation of Gaj Kesari yoga, it is formed when Jupiter is either in the kendra from moon or in kendra from the ascendant. In the astrology it is advocated that Jupiter should not be enervated or it should not be in adversaries.

The auspiciousness of the Gaj Kesari yoga is highly affected if Jupiter is debilitated or in the adverse position. On a contrary some astrologers believes that central position of Jupiter from moon is not so important.

But when Venus is in the centre from moon it is usually found that this yoga is not created. It is very important to understand the position of houses where this yoga is formed because the attributes of this yoga are highly dependent on the positions.

There are several combinations of Gaj Keari yoga, like when Jupiter is in the middle from the Ascendant or moon. This combination is found in the kundali of 20 to 33% of the people. There are certain people believes that Gaj Kesari yoga is created when Venus is in the centre from moon and this is one of the most auspicious occasions.

And same in the case of Mercury and Jupiter. But on the contrary some believes that auspiciousness is not always guaranteed. Because such a yoga is found in the kundali of 90% of the people and they are suffering from one or other sufferings in life. When Venus is in the sixth and eighth house the Shadashak Yoga is created.

In all such situations one of the Venus is in the central and the other is in the malefic position and this yoga cancels the auspiciousness of the Gaj Keari yoga and found to show inauspicious results. While in Gaj Kesari yoga of Mercury, Moon has its shadow on Mercury or Jupiter. And in this situation the Moon needs to be in the seventh house from both the Jupiter and Mercury then only Jupiter and Moon will be in the central position from each other.

Gaj Kesari Yoga is created by Jupiter and moon. And it is believed that both the planed can never be sublimed together in the kundali of a person. Because Jupiter is sublimed with Cancer and Moon is exalted with Taurus.

And both should be in the third and eleventh house from each other. When Moon is in the central position from Jupiter and it is in the eleventh house that is against the Gaj Kesair yoga. One thing is noted whenever the Jupiter is not in the centre the auspiciousness of the yoga is eradicated.

Formation of Gaj Kesari yoga has a lot of benefits like it nullifies the dosha of other planets present in the kundali of the person. Person having this Yoga has long life along with excellent logical skills, great confidence and leadership qualities.

The person has great decision making and have good mental and physical strength. They have great power to overcome the challenges of life and most of the time their victory is assured.

Great wealth and money is bestowed to those who have the yoga in their birth chart. And if the position of the Jupiter in not proper it needs to be consulted to an astrologer for the correction remedies.